SpeakEasy's "Color Purple": Sleeping with Celie Not Like Sleeping on a Cloud 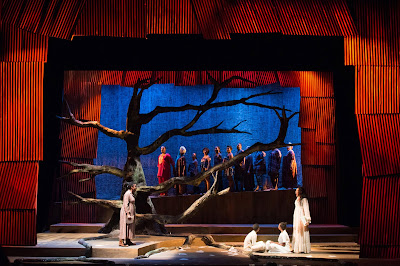 The Company of "The Color Purple"
(Glen Perry Photography)
The rousing production by SpeakEasy Stage Company of the 2005 Broadway musical version of the “The Color Purple” is a guaranteed audience pleaser. The original earned eleven Tony Award nominations, (though ultimately winning only one, for its lead performer, LaChanze), running over nine hundred performances, in large part due to the famously generous publicity it received from one of its producers, Oprah Winfrey, on her television talk show. Based on the popular 1982 Pulitzer-winning epistolary novel by Alice Walker, it was first adapted as the 1985 film version, which was in turn nominated for eleven Academy Awards (including one for Ms. Winfrey in the supporting actress category), but won none. These statistics may not be indicative of theatrical or cinematic politics as much as they are of the pitfalls involved in adapting such a sweeping literary work to another medium, especially when that source material is as plot heavy and full of characters as Ms. Walker’s is. This musical version, with a bloated book by Marsha Norman and two dozen songs with Music and Lyrics by Brenda Russell, Allee Willis and Stephen Bray, is a challenge even for those familiar with the novel and/or its film adaptation; for those who may be unfamiliar with either, following the story would be daunting to say the least. The recent trimmed-down version by British wunderkind John Doyle was reportedly a vast improvement, but unfortunately has not yet been made available. Thus it fell to SpeakEasy’s Producing Artistic Director Paul Daigneault, who helmed this production, to make the problematic narrative comprehensible. In large part due to a truly amazing cast and a closely coordinated technical crew, he succeeded.

As anyone who is familiar with the original saga knows, the plot covers the years 1909 to 1949, centering on the evolution of Celie (Lovely Hoffman), who is fourteen and pregnant for the second time by her father (David Jiles, Jr.). In the course of the story, both of her children are taken away from her, as is her beloved sister Nettie (Aubin Wise), with whom she loses contact for some four decades. Why she loses this contact, and how she progresses from a quietly passive teenager to an assertive and successful entrepreneur, the audience will discover, as she encounters numerous characters along the way, from her husband Mister (Maurice Emmanuel Parent) and his son Harpo (Jared Dixon) to Harpo’s wife Sofia (Valerie Houston) and his waitress whom he desires, Squeak (Anich D’Jae)…well, that’s just a few of them. All of them, to varying degrees, become a part of Celie’s story, not least the sultry singer Shug Avery (Crystin Gilmore), Mister’s long-time lover, whom Celie falls in love with and nurses back to health. The men are pretty much reduced to sexual predators, and the women often to mere sexual objects, although as this review’s subtitle above implies, those who have forced themselves on Celie will find their fates less than celestial. In any case, if ever the phrase “less is more” was true, it surely is here, where more is less. With so many fates to follow and musical numbers to digest (some seemingly cut off just as they are developing), it’s a wonder that this production is as moving as it is.

This is primarily due to Daigneault’s direction and casting acumen. As noted, it’s a huge cast, with so many great performances that one hardly knows where to begin. Surely, though, it should begin with the serendipitous choice of newcomer Hoffman, whose acting and singing skills are “Lovely” indeed. Add to her pivotal role the compelling work by the sympathetic Wise, the intimidating Parent, the indomitable Houston, the sexy and knowing Gilmore, the ditzy D’Jae….well, the whole lot of them, in fact. With expert Musical Direction by Nicholas James Connell and Choreography by Christian Bufford, the stage is alive with fabulous life. The simple Scenic Design by Jenna McFarland Lord (a huge tree that comes to represent how Celie grows as a central family force) avoids the necessity of overly frequent set changes, while the Lighting Design by Karen Perlow and Eric Fox enhances differing moods. The Costume Design by Elisabetta Polito is especially crucial for a work like this that covers generations, and the Sound Design by David Reiffel adds another crucial element. The craft on stage and behind it is strikingly impressive.

Lest one’s praise, and prose, be too purple, there are some problems that remain, despite the efforts of all involved in this version. There is the score, which, with some exceptions, (the title song, Shug’s down and dirty “Push Da Button”, Celie’s anthem “I’m Here” and a ballad or two) is unmemorable. There is that book, with sufficient plotting for two or three musicals; it also suffers from some sudden inexplicable transformations, not the least being the “redemption” of Mister at the finale. There are the issues of rape, incest, misogyny, servitude, wife-beating, and lesbianism (in a time when it was unspoken and unsung), that are not the typical expectations for musical theatergoers. The fact that this production is so involving, inspiring and magical is testimony to all of the professionals involved. Hoffman is a revelation in the central role, and the rest of the cast is outstanding. Of note is the fact that this reviewer unintentionally neglected to mention that this is a love story about African Americans, probably because of its universal application to the oppression of all women. As Shug suggests, the Lord becomes angry when one walks by the color purple in a field without noticing it. To avoid incurring the wrath of the theatre gods, by all means don’t overlook this one.
Posted by Jack Craib at 1:06:00 PM