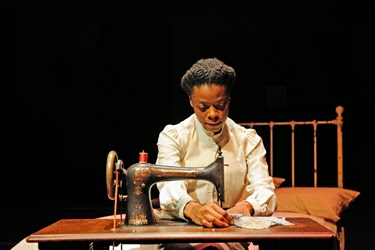 Trinity Rep’s current production of “Intimate Apparel” by Brown University alumna Lynn Nottage (winner of the Pulitzer Prize and many other awards for “Ruined”), is, as the playwright herself describes it, a “meditation on loneliness”, inspired by her own family history. It was first produced in 2003, and made its New York debut in 2004, winning the Drama Critics Circle Award as Outstanding Play. As directed here by Janice Duclos, long-time Trinity Rep resident acting company member, it’s easy to see why it was recognized. It’s an unusual window onto the life of a talented but frustrated woman. The play takes place in 1905 in New York City, where Esther (Mia Ellis) produces, by hand, the boned corsets popular from the 1800’s to the 1920’s (despite several health problems women suffered from wearing them). Ironically, the constraints that society imposed upon women, and African Americans especially, mirror the limitations, discomfort and even pain endured by Esther’s clients in the pursuit of beauty.

Her clients, here represented by two extremes, the upper class wealthy Mrs. Van Buren (Angela Brazil) and the disdained prostitute Mayme (Shelley Fort), have a lot in common, especially in the way they are treated or ignored by the men in their lives. The one decent man in Esther’s early life, the hard-working merchant Mr. Marks (Mauro Hantman), sells her the material she needs. Because of his devout Jewish faith, however, he cannot fulfill her more significant needs because of his own religious strictures. Esther’s landlady Mrs. Dickson (Barbara Meek) is a well-meaning presence, but perpetually trying to set her up with inappropriate suitors. Thus it should come as no surprise that a chance to pursue a promising long distance relationship (by correspondence) with a man from Barbados, George (Joe Wilson, Jr.), working on the building of the Panama Canal, provides a sudden glimmer of hope in Esther’s lonely life. This small cast of six manages to create many moving and memorable moments. Brazil is hilarious in her desperate drive to be au courant, as is Fort in her world-weary acceptance of compromises. Hantman is heartbreakingly conflicted in a sympathetic role at the center of Esther’s circumscribed world, almost but not quite providing the warmth she seeks. Meek is also devastatingly funny in her honest but fumbling ways. Wilson is very effective as the mysterious suitor whose intentions may or may not be as honorable as Esther wants to believe. And Ellis, while perhaps a bit too young and comely for the role of a plain thirty-five year old spinster, is a smoldering dynamo beneath her initial reticence. While the cast is uniformly terrific, it is Ellis who, both dramatically and literally, towers over the other players in Esther’s complicated story. Duclos’ direction of the various spheres of her life is impeccable.

The one problem with this work is that those spheres don’t interweave into a coherent fabric. With the obvious exception of Esther herself, these characters all exist independently of one another, rather than in a truly theatrically satisfying arc. The scenes, for the most part, are presented as separate vignettes that, at least in the first act, are too heavy on exposition, creating the dramatic equivalent of Esther’s multi-colored quilt. The result of Nottage’s writing is a series of fine patches rather than a unified creation. Still, in the hands of a very competent director and a tremendously talented cast, it’s ultimately an engrossing piece of theater, even if, unlike the quilt, the sum isn’t the equal of its parts. In the wrong hands, this play might betray some of its weaker seams, but Duclos and her actors triumph and convince. The technical credits are all superb as well, especially the Set Design by Patrick Lynch, providing four distinct venues that, along with the Lighting Design by John Ambrosone, enable the many transitions from scene to scene to flow as seamlessly as Esther’s creations (without the need for blackouts). The Costume Design by Alison Walker Carrier is integral to the story and its period, as is the Sound Design by Peter Sasha Hurowitz, with effective ragtime musical interludes, as well as the Speech and Voice Direction by Thom Jones (most notably with the difficult Bajan lilt and Yiddish inflections).

As all the real-life Esthers proved in their work and their lives, and this play portrays, it’s not what we see that involves us, but what makes us feel. As Mrs. Dickson says at one point, “we all bleed.” In corsets and in life, as well as on the stage, it’s what’s underneath that counts.
Posted by Jack Craib at 11:04:00 AM