Wonder of wonders, miracle of miracles, Goodspeed Opera has just produced a dandy revival of the beloved musical “Fiddler on the Roof”. The question of whether we would all still be in love with this musical, fifty years after its Broadway debut, has been resoundingly answered in this rousing production. One forgets how revolutionary the concept was back in 1964 when Composer Jerry Bock, Lyricist Sheldon Harnick and librettist Joseph Stein first proposed it. In the publication of the book for their earlier collaboration, “She Loves Me”, they alluded to a work they were planning to do based on “Tevye and His Daughters” by Ukranian Sholem Aleichem. A musical set in a Jewish shtetl, Anatevka, about a poor milkman with five dowerless daughters amidst pogroms in czarist Russia? Crazy, no? Yet in ran 3,242 performances, almost eight years, on Broadway, having received ten Tony nominations, nine of which it won (including Best Musical). The 1971 film version earned eight Oscar nominations and won three of them. Amazingly, this is the first time it has been mounted by Goodspeed in its own over-fifty-year history. It’s surely been worth the wait.

A large part of its success, then and now, is the depth of the book by Stein, an age-old tale about love, of a father for his children (and their love for him in return) and his love for his religious faith, and what happens when these come into conflict with one another. The scene is set by one of the most brilliant opening numbers ever conceived for any musical, “Tradition”. The curtain barely goes up before the audience knows how important traditions (especially religious tenets, including taboos) were to Tevye the Milkman (here played by Adam Heller). Yet he is surrounded in his own home by creeping modernism. While his wife of twenty-five years, Golde (Lori Wilner) is old-fashioned, this is not true of his daughters. The eldest Tzeitel (Barrie Kreinik) seeks to marry Motel (David Perlman) without the services of the local matchmaker Yente (Cheryl Stern); the next in line, Hodel (Elizabeth DeRosa) plans to marry the revolutionary Perchik (Abdiel Vivancos) without her father’s permission, only his blessing; then, the ulimate crisis, the next daughter Chava (Jen Brissman) wants to marry outside the faith, not only to a Gentile but to one of their oppressors, the Russian, Fyedka (Timothy Hassler). Tevye struggles to hold onto his culture and beliefs, as his small world changes around him at a rapid pace with conflicting crises around love and family, as well as pride and, yes, tradition. How much can Tevye bend until he finally breaks? Author Alisa Solomon, in her fascinating book “Wonder of Wonders: A Cultural History of Fiddler on the Roof”, notes that Tevye’s muttered blessing to Chava conveyed through her sister Tzeitel (left unresolved in the original story) and in the presence of Fyedka, “in recognition of their marriage, reluctant as it is, catapults him across time”. Teyve had emphasized, at the close of that opening number, “without our traditions, our lives would be as shaky as-- as a fiddler on the roof!”

One might criticize such devotion to traditions (especially those that morph all too frequently into laws), as expressed in the song “Sabbath Prayer” (“strengthen them, O Lord, and keep them from the stranger’s ways”), but it’s still a very popular story, surviving even the most amateur of productions, though disappointing if not professionally choreographed, largely due to its phenomenal multi-leveled score. Bock and Harnick were never better. Who can ever forget the exuberant “If I Were a Rich Man”, “Miracle of Miracles”, and to “To Life“”, or the poignant “Do You Love Me?”, “Far From the Home I Love”, and the finale, “Anatevka”? And then there’s “Sunrise, Sunset”, in a class by itself (and performed by the cast throughout the theater, cleverly creating a truly immersive experience).

And the score is given full force by the performances of the entire cast, led by the wonderful Heller, who emerges as larger than life without ever becoming a cartoon, a perfect Tevye in his warmth and wisdom. He’s firmly backed up by a strong Wilner and a hilarious Stern. The younger members, most notably Perlman, DeRosa, Vivancos, Brissman and Hassler, also shine. The true impact of this or any production of “Fiddler” really rests on the skill and imagination of a professional choreographer. Here we are blessed with Choreographer Parker Esse, who, under arrangement with the estate of the late original choreographer Jerome Robbins, reproduces the all-important dancing, making the relatively small stage come alive (especially in the “Bottle Dance”, amazingly executed without velcro, magnets or a net). Under the terrific direction of Rob Ruggiero, the huge cast of twenty-five is fabulous both individually and as a unit. They include the other two daughters, Shprintze (Joy Del Valle) and Bielke (Allegra Rosa), as well as Lazar Wolfe (John Payonk), the Constable (Darren Matthias), and, in the most charming touch, the on-stage presence of a real live fiddler (Max Chucker), invoking the 1908 Chagall painting of “The Dead Man”, a fiddler on a rooftop, which initially inspired Stein’s book. All of the technical credits are up to Goodspeed’s exacting norms, from the spare but fluid Scenic Design by Michael Schweikardt (not a painted drop in sight) to the Costume Design by Alejo Vietti, Lighting Design by John Lasiter, Sound Design by Jay Hilton, and Music Direction by Michael O’Flaherty (with Orchestrations by Dan DeLange).

Stripped to its essentials, this production provides a “Fiddler” of basic simplicity yet also great beauty, one for all ages. As Tevye himself might put it, it’s a blessing. Solomon puts it in her aforementioned work: “(Tevye) wonders if (the townsfolk) might some day meet on a train, or ‘in Odessa, or in Warsaw, or maybe even in America’. In all those places, and far beyond, the world has met-and embraced-him. He belongs nowhere. Which is to say, everywhere." 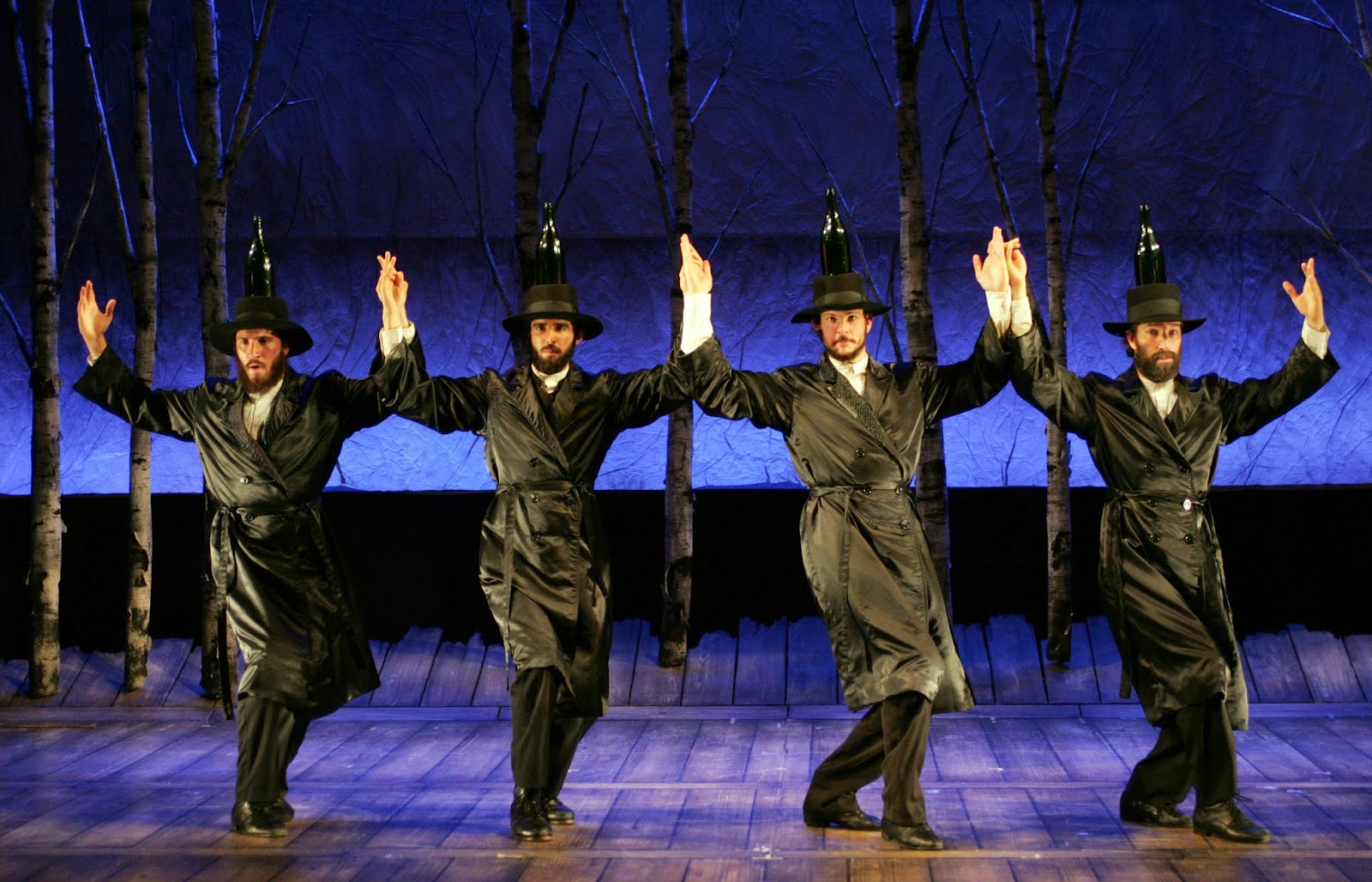 The Bottle Dance in "Fiddler on the Roof"
(photo: by Diane Sobolewski)