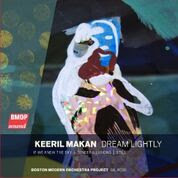 
Makan, whose parents are of Russian-Jewish and Indian-South African ethnic backgrounds, was brought up by them with intense exposure to the musical heritage of several cultures, made manifest in this recording, with its roots in Indian classical as well as western rock and blues. A professor at MIT, he presents here four of his works that portray harmony and lyricism via acoustical instrumentation, as exemplified by guitarist Seth Josel. Makan himself describes his work Dream Lightly as not really a traditional concerto, but as though the music exists “inside of the guitarist's head, helping, supporting and coloring”. While this piece is soothing and calming, the lengthy If We Knew the Sky is quite the opposite, and the most challenging of these four works. The remaining cuts, Tender Illusions and Still (with Charles Dimmick on violin and Peter Sulski on viola, are more approachable. 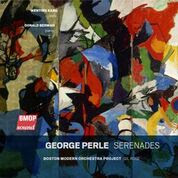 Perle, a Pulitzer Prize winning composer, presents the debut on CD of his complete Serenades, the first featuring solo viola and ten-piece orchestra, the second with eleven musicians but no soloists. The last utilizes solo piano and a ten-piece orchestra, and was previously recorded and nominated for a Grammy Award in 1986. They were all composed in the 1960's. The soloists are Wenting Kang on the viola and Donald Berman on the piano, lending credence to the composer's respect for traditions while setting some of his own that others have used for inspiration. As individual pieces, they are reasonably approachable, especially the (Pulitzer-winning) Serenade No.3, with its five movements including Allegro, Burlesco, Elegy (in George Balanchine's honor), Perpetuum mobile and Finale (here with Berman on piano).  The viola solo (by Kang) in Serenade No.1 with its five movements of Rondo, Ostinato, Recitative and Coda, and the eleven players in the Serenade No.2 (solely identified as I, II, III, IV and V) round out this well-balanced program of works from 1962-1983.


The BMOP label, created by Rose in 2008, rightly prides itself on encouragement of innovative musical offerings by moddern composers, and these two issues certainly carry on that tradition.