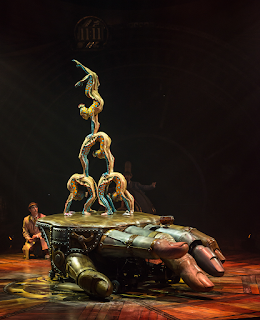 
This production is extraordinarily well-directed (and written) by Michael Laprise, with Director of Creation Chantal Tremblay. As usual for the company, the technical contributions are all spectacular, from the Set and Properties Design by Stephan Roy (with a creative found-object feel) to the whimsical Costume Design by Philippe Guillotel, to the great choreography by Yaman Okur, Sidi Cherkaoui and Susan Gaudreau, to the equally fantastic Acrobatic choreography by Ben potvin and Andrea Zieger, to the Sound Design by Jacques Boucher and Jean-Michael Caron, the Lighting Design by Mrtin Labrecque and Makeup Design by Eleni Uranis. Especially winning is the musical composition and Direction by "Bob and Bill" (Guy Dubuc and Marc Lessard) and Raphael Beau, transforming 1930's swing and jazz, (with an assist from Greek singer Eirini Tornesaki), a welcome change from their New Age scores.
The show's tagline is true: reality is relative. Seeing is disbelieving!
Posted by Jack Craib at 4:42:00 PM