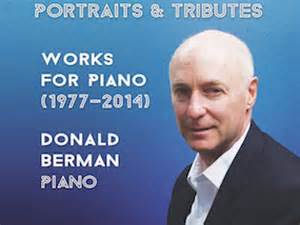 In the recent Bridge Records CD release Portraits & Tributes: Works for Piano (1977-2014), local composer Scott Wheeler presents more than two dozen brief musical pieces written by him over almost four decades, all impeccably performed by pianist Donald Berman. They include, as the title indicates, some fifteen tributes and a dozen portraits, all referencing Wheeler's friends, family and fellow artists. Inspired by the works of his teacher and mentor Virgil Thompson, the “portraits” vary from his peaceful Pastorale of arts patroness Sara Davis to the lively Cookie Waltz and Gallop centered around a seven-year-old girl. The “tributes” range from a work dedicated to Stephen Sondheim quoting By the Sea from his musical Sweeney Todd , to a birthday remembrance for New York Times classical music critic Anthony Tommasini, to two pieces honoring pianist Berman himself.


Mostly atonal (though there are moments that segue to the more melodic and traditional), this varied collection reflects the local reputation of the composer as an esteemed artist. Known for his work with the Boston Lyric Opera (as well as the Metropolitan and Washington Operas) and numerous other companies, Wheeler is also a Professor at Emerson College. Thus it should come as no surprise that so many subjects of his pieces are also locally renowned, from Gunther Schuller to organist James Woodman to theater critic Marianne Evett. Berman is also widely heralded in the area as an accomplished proponent of the works of Charles Ives and Carl Ruggles.


The overall effect of these works gives rise to an appreciation of just how eclectic the choices made by the composer truly are. Though the first track, a decidedly atonal piece, Alphabet Dance, sets the tone for most of this recording, there is more than enough for even the most conservative taste to enjoy. There are not only echoes and homages to Sondheim, but also to Scott Joplin, and even the Beatles. Liner notes by Wheeler himself provide an intimate detailed and insightful view of a man, his friends, and professional family. This is a compelling and comprehensive compilation of a lifetime of artistry from a man considered a local and international musical treasure.
Posted by Jack Craib at 10:18:00 AM